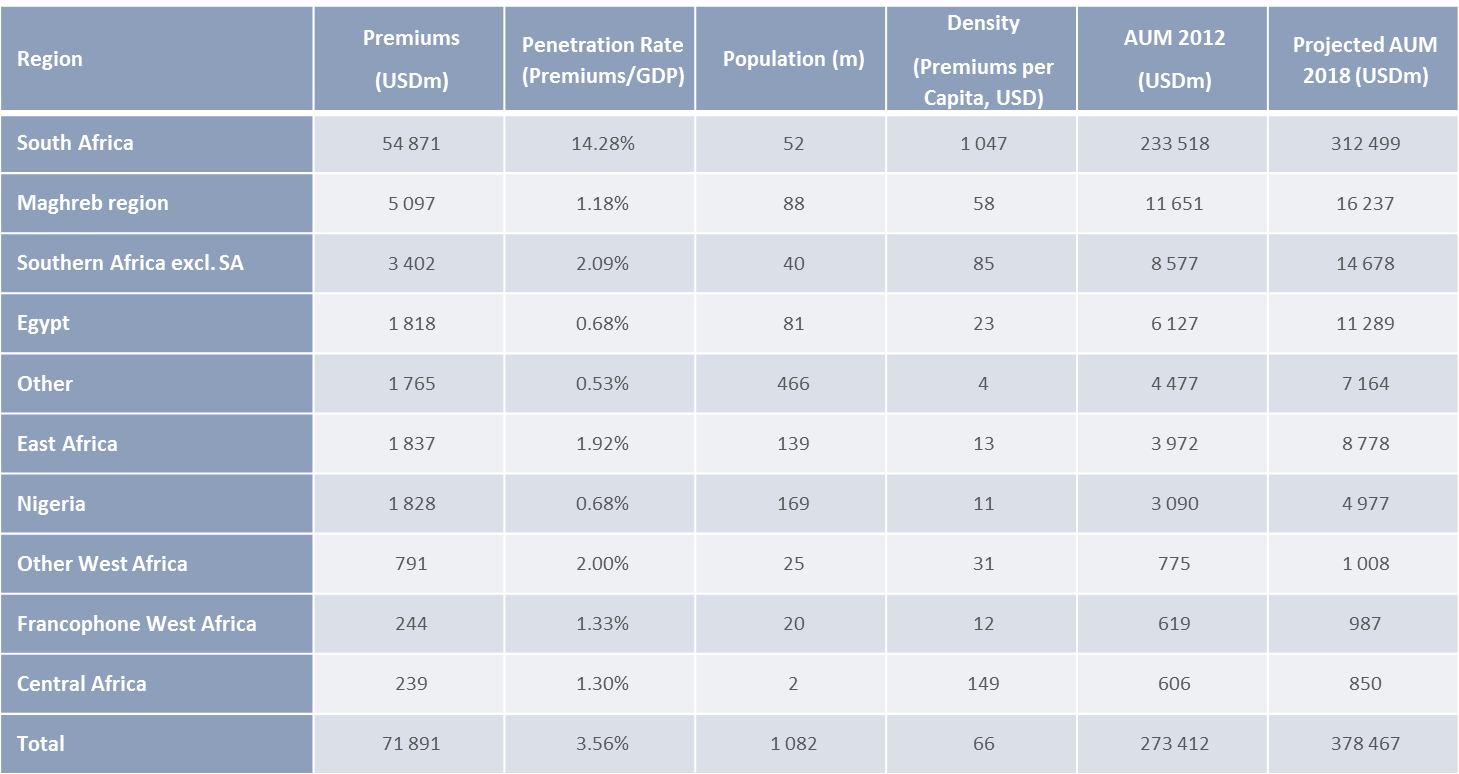 *Data source did not specify individual countries, as such, they could not be allocated to Bright Africa’s regional groupings

Insurance penetration is expected to grow significantly across all African markets, according to BMI Research, which has the potential to significantly increase insurance assets available for investment in those markets. In particular, East Africa, Egypt and Southern Africa (ex-SA) are expected to show strong increases in insurance penetration over the next five years.

It is clear globally that higher penetration ratios lead to greater AUM, meaning that as penetration increases in Africa, insurance assets can be expected to grow, resulting in larger pools of domestic capital. The overall increase in AUM of African insurance companies from 2012 to 2018 is expected to be 37% compared to the combined GDP growth of 19% over the same period. Outside South Africa this growth is expected to be significantly higher.

Across the world, 65% of insurance premiums written are contributed by the G7 economies, which only constitute 10% of the world’s population.  The average premium spend in G7 countries in 2012 was USD 3 910 compared to USD 120 for emerging markets including Africa. In 2012, Africa’s contribution to all global premiums written was 1.55%, well below its portion of global GDP, and reflective of the under-penetration of insurance in Africa.

The East African insurance market is relatively well developed with Kenya leading the pack. An association of Kenyan insurers released a plan in 2011 to grow the industry by 22% p.a. by simplifying and modernising the products, using social media to advertise, and educating customers.

Public disclosure of insurance AUM is weak in many parts of the continent, but RisCura has estimated these assets based on publicly available information.

Note: South Africa has been excluded from the analysis as its size renders the other regions insignificant. The South African insurance industry’s AUM in 2012 is USD 234bn and projected to be USD 312bn in 2018, therefore expecting an increase of USD 78bn.

South Africa accounted for 76% of premiums written in Africa in 2012, with a penetration rate of 14.28% compared to the continent average of 3.56% and global average of 6.5%. The average penetration ratio in Africa (ex-SA) is 1.04%. Globally, life and non-life insurance premiums are roughly equivalent, but in Africa (ex-SA) life premiums are overshadowed by non-life premiums by more than three to one. The global average for annual life insurance premiums per capita is USD 373 compared to USD 5 for Africa (ex-SA). Individuals will only start fulfilling their life insurance needs once their short-term needs are fulfilled and with low income prevalent in Africa, this leads to many individuals not opting for life insurance. Additionally, in many parts of the continent there are traditional substitutes to life insurance such as community collections, as well as cultural attitudes to death that have limited the uptake of life insurance in some countries. In the case of death 0.3% of Africans make use of insurance products, 14% borrowed money and 25% make use of savings; a similar scenario is the case for serious illness. In the case of destruction of agricultural crops or livestock, only 0.2% made use of insurance, 45% had no way of mitigating the loss and 18.6% made use of their savings to offset the loss.

Improving economic prospects, as well as the trend of urbanisation, is beginning to change these practices, and forecasts of life insurance penetration have increased. As discretionary spending increases and asset-backed lending increases, short-term insurance penetration is also expected to improve, resulting in larger pools of insurance assets on the continent.  Research has shown that the main contributors to an underdeveloped insurance market are a combination of costs, poverty, shortage of data, lack of distribution channels and underdeveloped financial systems.  It is further clear that the more educated people are, as well as the wealthier they are, the more likely they are to buy insurance products. This supports the expected growth prospects for African insurance, as the growth of the middle class improves both education and income levels.

NEXT: Development finance institutions in Africa