Africa is not a single investment destination with a single set of standardised risk factors and homogenous potential for reward. Although some high-level similarities are evident, digging into the specifics of certain regions and countries show that Africa is comprised of a range of distinct investment destinations; each with its own attractions, challenges, cultural differences and business practices.

Investors looking at Africa for the first time typically look at the largest economies by GDP or the largest cities by population. While this is useful, it may be better to start at a regional level by identifying groups of countries with similarities.

RisCura’s third Bright Africa report 2015 looks at the investment potential on the continent by dividing it into markets that are more meaningful for investors. This has been done by analysing cultural and linguistic connections, interconnectivity through trade blocs, sharing of expertise, good business relations, and relative ease of transportation, among others.

By assessing Africa in this way, investors get a better understanding of the strengths and weaknesses of an investment destination by not only analysing the characteristics of the country of interest, but also the support that it receives from its regional partners. It also allows investors to identify the long-term potential of an investment by better understanding the potential growth areas into neighbouring countries. (See box for Bright Africa’s regions)

How do regions compare?

What makes a region attractive to investors? The table below shows the aggregated sizes of the economies, their real GDP growth, the amount of external investment they receive in the form of FDI, and the sizes of their populations.  It also shows the amount of trade that occurs within each region, as well as their rankings by ease of doing business, attractiveness and connectedness (weighted according to GDP). 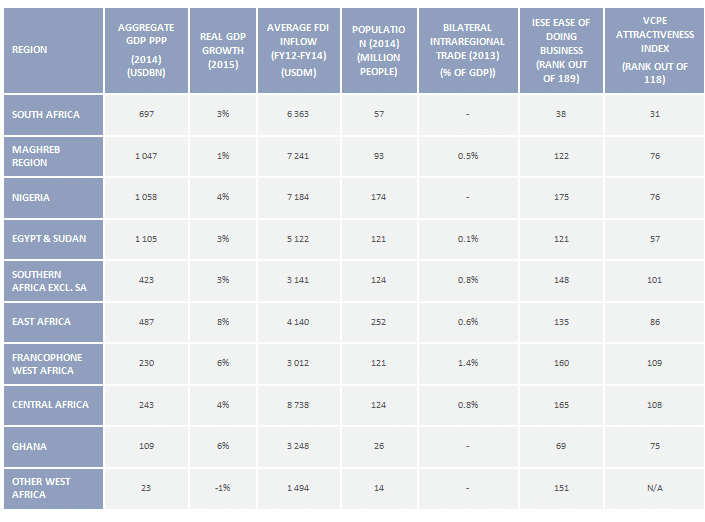 On a purchasing power parity (PPP) basis, the largest regional GDPs are the Maghreb, Egypt & Sudan, and Nigeria. The most heavily populated regions in Africa are East Africa and Nigeria, with at least 50 million people more than the other regions. East Africa is especially large with Ethiopia’s population of 91 million (2014 estimates).

GDP growth for 2015 varies from negative growth, to 8% real GDP growth forecast for the year, further highlighting just how different the characteristics of these regions are. The more developed regions on the continent including the Maghreb, South Africa, Egypt & Sudan and Southern Africa (ex-SA) are expecting real GDP growth of around 3%. The Maghreb region is biased downwards because of negative growth expected in Libya, which impacts the region. Other West Africa is forecast to decline in 2015, as the countries worse-hit by the Ebola outbreak will take some time to recover.

More high growth areas include Francophone West Africa, Ghana, and East Africa (the frontrunner) with 8% forecast for the year. Nigeria, whose GDP growth forecast was approximately 9% for 2015 less than six months ago, has been adjusted downwards significantly due to the drop of global oil prices. The oil price decline has impacted the GDP of the country directly through lower oil revenue, and indirectly through increased inflation due to the depreciation in its currency. The uncertainty leading up to the elections that took place in March 2015, as well as the insecurity in the north of the country have also become deterrents to investors, further impacting growth. The result of the elections was very positive, with ex-President Goodluck Jonathan peacefully handing over power to newly-elected Muhammadu Buhari.

Southern Africa (ex-SA) has received erratic but improving FDI inflow, increasing from USD 1.6bn in 2012 to R6.0bn in 2014. Egypt & Sudan have experienced a similar increase from USD 1.5bn to USD 8.6bn over the period. Nigeria’s FDI inflow, on the other hand, has declined from USD 8.9bn in 2012 to USD 5.6bn in 2014 in the lead up to the 2015 elections and increased economic volatility on the back of the lower oil price.

It is interesting to note that when it comes to trade, Francophone West Africa appears to be the region with the highest engagement in a mutually beneficial collaboration with its neighbours. East Africa and the Maghreb region, however, score low on intraregional trade, showing less interdependence within those regions. Egypt’s trade with Sudan is limited, which is understandable given Sudan’s recent political history. It is worth noting that Egypt’s trade with the Maghreb region far outranks that with Sudan, but in general, Egypt’s trade within Africa has declined dramatically over the past few years to less than 3% of its total, with no African country, apart from Libya, making it onto the top 15 export markets (the Economist).

Looking at the rankings by ease and attractiveness, the Maghreb region and Nigeria for example, score the same on a weighted-average basis with respect to attractiveness, but when considering the ease of doing business, the Maghreb region far outranks Nigeria. In fact, Nigeria is considered in the top 15 most difficult places to do business, out of the 189 countries around the world that are ranked. Ghana and East Africa on the other hand, both have relatively strong rankings, falling behind only South Africa, the Maghreb and Egypt & Sudan regions.

Relative wealth is assessed by comparing the Gini coefficient of a region to its GDP per capita, as well as the size of each region on a purchasing power parity basis (PPP). It is apparent that in many African countries, although GDP is growing and is very large in many cases, the wealth generated by the country’s GDP is not filtered down to the average consumer, illustrated by high levels of inequality and low GDP per capita.

Specifically in Africa’s largest individual economy, Nigeria, the GDP per capita is very low relative to its GDP when compared to the other regions. South Africa is the leader on an individual-wealth basis, with only the third largest GDP of the group, however the country’s Gini coefficient is the worst on the continent, showing a large disparity between the rich and the poor. Both North African regions show a good mix of large GDP per capita, lower Gini coefficient, and large economy. 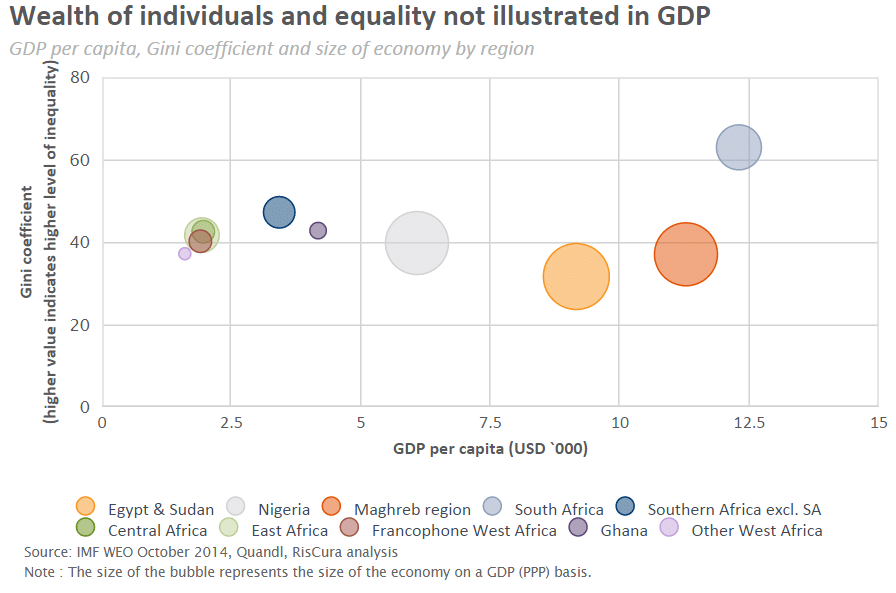 The RisCura Bright Africa report for 2015 divides the continent into 9 ‘meaningful markets:

Otherwise known as the western portion of Northern Africa, these countries form the Arab Maghreb Union, established in 1989 (Western Sahara has however, been excluded from all analysis). The region was established with the goal of functioning as a unified political and economic grouping. Political unrest in the region has stunted progress since its inception but hope still remains that the Union will fulfil its purpose in years to come. Algeria, Libya, Mauritania, Morocco and Tunisia are included in this region.

Previously united under British rule, these countries still share strong ties, as well as one significant commonality – the trade facilitation through transport on the Nile River. As Egypt does not fall within the Arab Maghreb Union, it is separated from the rest of North Africa. However, Egypt’s strong economic and cultural ties with the Middle East bring natural trading partners, and it is often seen grouped with the Middle East for investment purposes.

This is a commonly recognised region on the continent, and typically includes Mauritania. However, Mauritania has been allocated to the Maghreb region as it is found to have closer ties to the North African countries. These French-speaking countries share more than just a language. Due to their common history as French colonies, they also share similar legal and socio-political systems. The countries in this group are Benin, Burkina Faso, Cape Verde, Côte d’Ivoire, Guinea, Mali, Niger, São Tomé and Príncipe, Senegal and Togo.

On its own, Nigeria is the size of the entire Maghreb region on an aggregated-GDP basis. While Nigeria is traditionally grouped with the rest of West Africa, its reliance on the rest of the region is less pronounced, likely as a result of its massive standalone GDP, its access to international markets via its six large ports, and its population of over 170 million people.

This is a combination of the East African community (Kenya, Tanzania, Uganda, Rwanda and Burundi), the LAPSSET corridor (Kenya, South Sudan and Ethiopia) as well as Djibouti, a crucial link to the Indian Ocean for Ethiopia and South Sudan. Kenya has traditionally headlined this region through consistently generating the largest GDP and acts as the primary route to international trade through the Mombasa port. (Somalia and Eritrea are excluded from all analysis.) The connectivity that will be provided by the completion of the LAPSSET corridor in the long term will tie the South Sudan and Ethiopia into the EAC, with its highly beneficial existing trade blocs.

This market is the same as that defined by the African Development Bank with the exception of Madagascar, which has been classified as Southern Africa (ex-SA). On a GDP basis (current USD) and by population, the Central Africa region is on par with the Francophone West African region. Countries included here are Cameroon, Central African Republic, Chad and the Democratic Republic of Congo, as well as Equatorial Guinea and Gabon.

This incorporates countries south of central and eastern Africa, and north of the South African border. The region has support from the most developed economy on the continent from the South, and access to capital coming out of South Africa as large companies look to expand into the rest of the continent. The group comprises Angola (which offers substantial oil resources), Botswana, Comoros, Madagascar, Malawi, Mauritius, Mozambique, Namibia, Reunion, Zambia (substantial supply of copper) and Zimbabwe.

Like Nigeria, South Africa is a large African economy on a standalone basis. Due to the developed nature of South Africa relative to the rest of the continent, it has not been included in the Southern African region. South Africa boasts the largest GDP per capita of all the regions (double that of Nigeria) and is the most advanced investment destination on the continent. The South African market includes Lesotho and Swaziland due to their reliance and proximity to SA. The Swazi lilangeni is pegged to the South African rand, which is also accepted as currency within the country.

This region includes Ghana, Liberia, Sierra Leone, Guinea-Bissau and The Gambia. Of course, due to the geographic placement of these countries, an analysis of intra-regional trade or transport infrastructure linking the ‘region’ would not be meaningful. Where appropriate, Ghana has been compared at a country level, rather than as a part of the ‘Other West Africa’ region. Although Ghana’s recent economic challenges have dampened investor confidence, the country remains an important economy for investors.