Here are this month’s highlights:

Coming out of the dark

Chinese equities – particularly the offshore listed shares – had a remarkable rebound in November, with the MSCI China and MSCI China A Onshore indices up 29.7% and 11.0%, respectively, recouping most of their losses from the previous months. All the key market concerns, including pandemic controls, property market woes and geopolitics, saw positive developments as the Chinese government returned to pragmatism and prioritised economic growth. We had anticipated policy adjustments after October’s Communist Party congress, but the recent moves exceeded our expectations. However, it is still early in the normalisation process.

On the macro side, recent economic data continued to show weakness due to the impact of Covid restrictions, with November’s PMI numbers contracting for the second month in a row and foreign trade falling more than expected. However, given strong policy support and reopening of the economy, investors are now looking forward to a rapid recovery in 2023/24. At the Central Economic Work Conference in mid-December, China’s top policymakers reinforced their pro-growth stance, with emphasis on boosting domestic demand and supporting the private sector, including Big Tech and real estate businesses.

In this commentary we consider the latest developments on China’s Covid policy and the property sector.

On the path to reopening

After almost three years since the pandemic started, China is finally pivoting away from its draconian zero-Covid policy, with the pace of relaxation faster than most expected. Following a 20-point plan announced in November, 10 more measures were unveiled in early December despite rapidly rising daily Covid cases. These measures range from eliminating the quarantine period for foreign arrivals and reducing testing, to discontinuing contact tracing. There is also an increased effort to vaccinate the elderly.

An abrupt change of policy has brought concerns about a Covid tsunami as the country navigates the winter season and the Chinese New Year holiday. Having said that, the main variant in China is Omicron, which is highly transmissible but has a far lower casualty rate. Second, China is much better prepared compared to India during the first wave and even some developed nations – currently over 90% of the Chinese population is vaccinated, with 86% of people over 60 years of age and 65% of those over 80 having had two shots. Knowledge and availability of Covid treatments, including antiviral drugs, is much better, and effective media influence and a more cooperative population will help slow the spread and alleviate pressure on the healthcare system. Lastly, the Chinese government can learn from Hong Kong and the experiences of other countries on how to better manage the transition.

The direction is now very clear, and a full reopening scenario is upon us. A wave of Covid infections will have a short-term impact on worker absenteeism and consumer spending, but this should clear quickly, and barring any new variants or other unexpected developments, the economy should be in full swing before the end of the first half of 2023.

At the same time we saw a drastic policy shift in the property market. In the past weeks there have been sweeping rescue measures announced in a coordinated manner by the central and local authorities. This clearly shows the government’s intention to put a floor under the liquidity crisis in the sector, prevent systemic risks and revive the economy. Given the importance of the property sector to the Chinese economy (it is about one-third of GDP) and the CCP’s social objectives, we have always believed that the government would eventually step in to provide support and make sure the incomplete properties are delivered. Recent measures include:

As a result, both equity and dollar bond prices of private developers have more than doubled, or even tripled, since October. However, the recovery process still has a long way to go. The physical market is only expected to improve in the second half of 2023, which is key to sustained improvement in developers’ liquidity. There will likely be a few more defaults, and many private developers will have to be restructured, merged or taken over. The industry and its business model will be very different compared to the past.

While developed markets continue to deal with the risk of stagflation and high valuations, China is on a different trajectory. The country is recovering from a cyclical low and does not face the same inflationary pressures, allowing its macro policy settings to remain accommodative. On the back of strong earnings growth and low valuations, we expect better returns for Chinese equities in 2023.

We have already seen how the pandemic changed people’s approach to spending and saving across the world. Savings increased, loans were paid down and expenditure on non-essentials like travel and high value goods declined sharply. The following chart shows that China is no exception. Household savings have risen at the expense of loans, travel and consumption of high value goods: 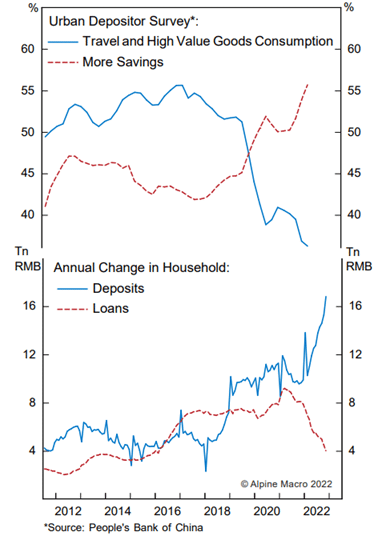 In other parts of the world, we saw how demand increased as the economy reopened and consumers returned to normal life. In many cases the boost was very rapid, leaving companies unprepared or underprepared. For example, airlines and airports across Europe faced a tricky summer in 2022 as demand for flights outpaced their ability to re-recruit airport staff and cabin crew who had been laid off early in the pandemic. A continued shortage of some intermediate goods (notably semiconductors) continues to plague global manufacturing, which has contributed to global inflation in the face of a jump in demand for commodities and goods.

It is too early to tell exactly which sectors of the Chinese economy will be impacted by labour or material supply chain issues, but what is clear is that “normality” is now back on the menu.