Last year was a bit like something out of a sci-fi book or movie. None of us could have ever imagined what was to come. It was a year of concern and tragedy for many families who saw their loved ones fall ill. Yet it was a cheerful year for equity investors, thanks to an unprecedented level of stimulus support from global governments and central banks. The ride, however, was bumpy. This was a year where diversification paid off. In this month’s newsletter we recap some 2020 highlights.

Phase 1: A storm brewing in Wuhan

In early 2020 things were looking upbeat after the volatile 2019 US-Sino trade dispute. The Chinese equity market started off optimistically on the back of a partial trade deal with the US. Chinese markets were buoyant, rising by almost 5%.

It was not until late January that investors began to appreciate the developing pandemic at the centre of the country. Whilst developed markets dismissed it as a Chinese domestic storm around Wuhan, like SARS, Chinese markets fell by 15% from their January peaks. From a global perspective, our real concern was the disruption to global supply chains. At one point Jaguar Land Rover had even flown parts to the UK in suitcases!

We made some interesting observations during this phase that were to become the global themes of 2020. The impact on industries such as restaurants, airlines and entertainment venues were self-evident.

“On the other hand, e-commerce and online gaming were significant beneficiaries of the lockdown. Revenue of the Chinese mobile gaming sector during the Lunar New Year holidays in 2020 was 33% higher than the year before.”

The bear market was short-lived thanks to a combination of government stimulus and a severe, but short lockdown. Chinese equity markets had recovered all their losses by early March  — only for the pandemic to then spread globally. 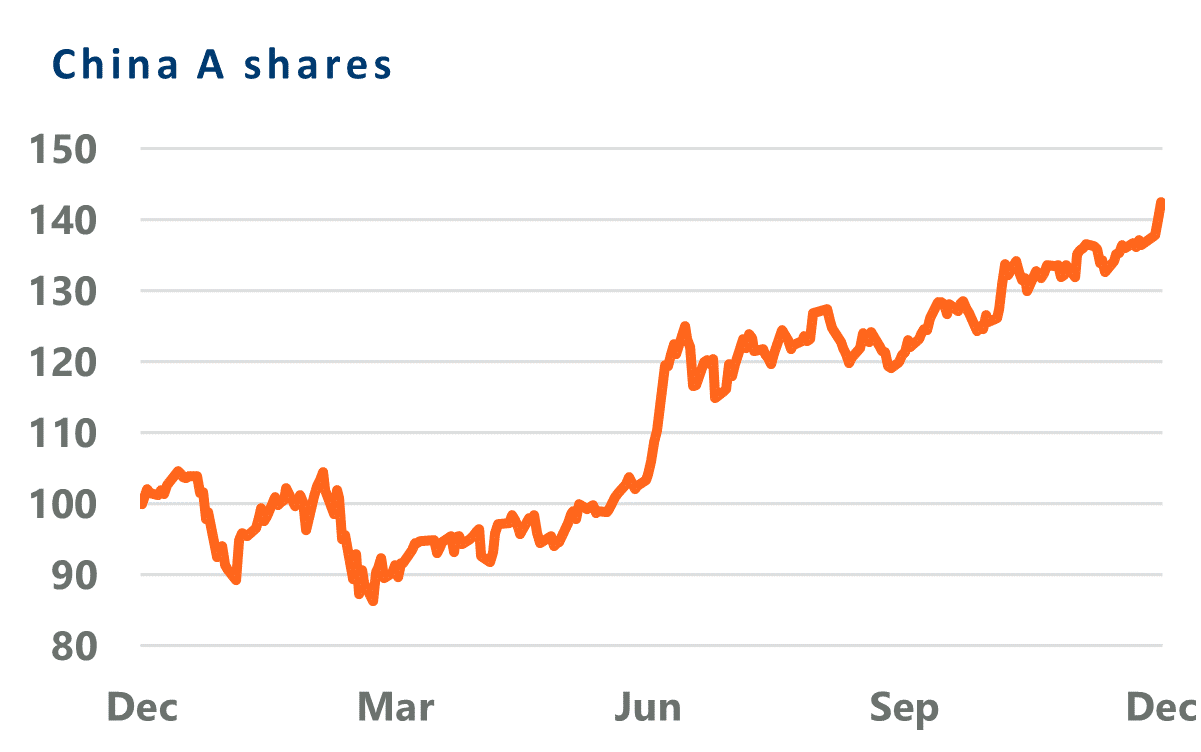 Phase 2: The global spread of COVID-19

In February, the world could see the virus was spreading, but no one really knew what the consequences were going to be. We remember asking multiple investment managers what happens if the world temporarily shuts for business. No one had a clue!

The free fall of global markets started in mid-February and lasted for a month. Chinese equities fell 20% during that period, while other major markets slumped 30-40%. However, for the Chinese, there was good news from ground zero in Wuhan. Incremental daily COVID-19 cases across the nation had declined to fewer than 100. Life had also started to return to normal – even the shutdown of Wuhan was being eased.

The unique way in which the Chinese system operates certainly helped them manage the virus outbreak. Western countries don’t have the capability or political will to implement such extreme lockdowns or the surveillance systems to follow the movements of their people (typically through their phones).

Stock markets started their V-shaped recovery as governments stepped in to deliver unprecedented fiscal and monetary policy. This lasted until the end of the year and surprisingly many equity indices ended the year at higher levels than the start of the year despite the pandemic.

Chinese equity markets significantly outperformed almost all other stock markets. Whilst the recovery in developed markets was primarily driven by growth stocks, the recovery in China was broadly across all sectors. It was the only major economy that was recovering on all measures as life returned to normal. The Chinese track and trace system is rigorous with significant clampdowns and mass testing of neighbourhoods upon identifying local outbreaks.

“Chinese A shares also benefited from an entirely local shareholder base that was feeling more optimistic and confident creating a further positive momentum of share prices. This demonstrates how China A shares can add diversification benefits to global equities.”

Whilst the headline indices continued their trajectory in autumn, there was a style shift towards “beaten up” value stocks with the news of vaccine approvals. At the same time, regulators turned their attention towards large technology ranging from social media in the USA, antitrust issues in the EU to Ant Financial in China.

The Chinese regulators stepped up the scrutiny of their tech sector with the spotlight on Alibaba. The regulators first started by introducing rules that sought to raise standards for online lending and shortly after the Shanghai Stock Exchange suspended the highly-anticipated listing of Ant Financial, the largest fintech company in the world.

“New antitrust rules were brought in to curb anti-competitive behaviour such as forcing merchants to sell exclusively on one e-commerce platform. This time the share price of Alibaba collapsed significantly along with other internet companies such as Tencent and Meituan.”

The prices recovered somewhat as they continue to deliver revenue growth, but it is clear that the tone of regulation is unhelpful to these companies.

We believe that the introduction of these regulations is inevitable, much needed and there is more to come globally. The better technology companies should embrace these changes.

The year 2020 was a remarkable year that threw multiple surprises at equity markets, including the significant underperformance of value versus growth.  Diversification across managers helps funds to deliver relative returns in all types of markets.

As we kick off 2021 and head into the Chinese New Year, we have seen factor rotation gaining traction. Certainly, it’s very difficult to predict whether this will sustain and for how long, but as dispersion is at historical highs, we think it is prudent to ensure the portfolio stays balanced and there is no significant bias to any style.