The recent downturn in commodity prices and the resulting impact on the finances of many African countries has resulted in significant changes in the risk profile of the African energy market. With projects across the financing, construction and operational phases being affected.

Funding and the ability of governments to make ongoing payments, represent one of the major risks for any energy project. This need for consistent income to finance infrastructure development is discussed in more depth in RisCura’s Bright Africa 2015 report. When comparing the sources of funding of East Africa to that of other regions below, the high proportion of tax income results in a higher level of predictability of income. 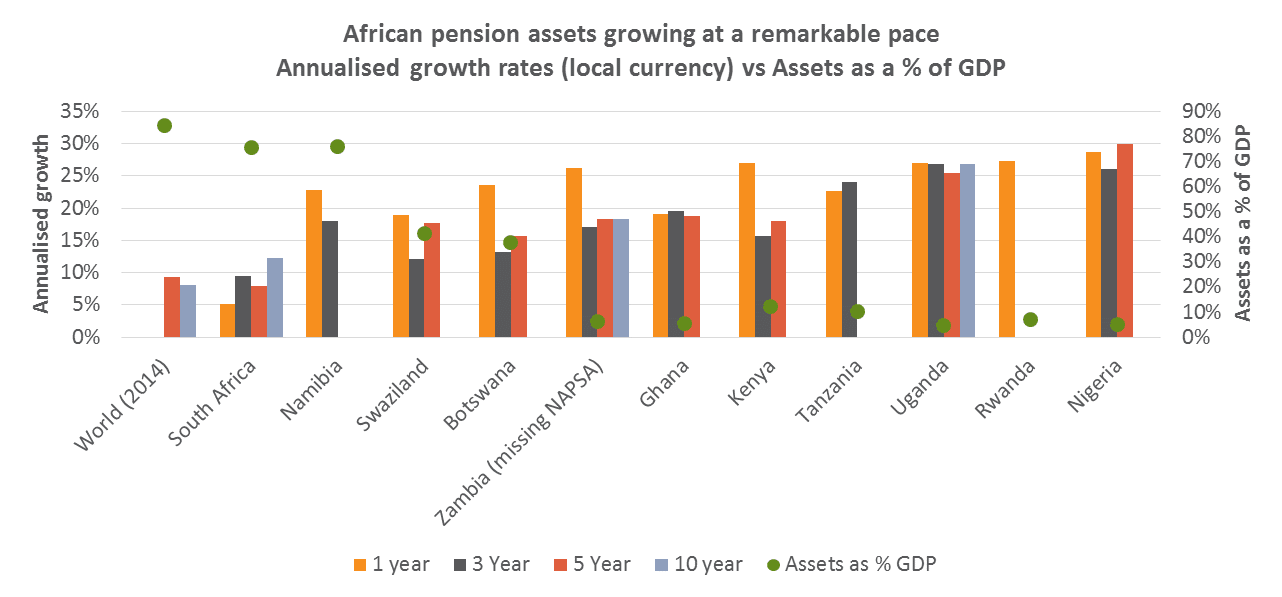 The downturn has meant that the large oil-dependent economies on the continent such as Nigeria and Angola have been exposed to significant headwinds.  With the curtailment of expenditure as the inflow of foreign currency and royalties decreases, currencies have come under pressure, government income has decreased and the cost of debt funding has increased. All of these factors result in a decrease in the funds available for infrastructure development.

With East African economies such as Kenya, Tanzania, Rwanda and Uganda being net fuel importers, the recent drop in the fuel price has affected their balance of payments positively. This has in turn supported their currency and lowered the risk of financing and constructing projects in these countries. .

Kenya in particular is currently being perceived as an increasingly attractive destination for energy investments. This is the result of strong population growth, increased expenditure on infrastructure, including the integrated LAPSETT corridor, and sustained broad-based economic growth that lowers the long-term risk associated with investment into the energy sector.

Another market that has been performing strongly in both risk assessments and growth is Ethiopia. The large population, sustained growth and relative stability of this market make it extremely attractive. Ethiopia is also a net fuel importer, and as such has received a further boost.  The government is also a strong supporter of infrastructure through its Growth and Transformation Plan and has been building one of Africa’s flagship hydro-electrical projects, the Grand Ethiopia Renaissance Dam. Investment into this energy market however continues to be challenging due to a lack of privatisation in the sector.

The long-term nature and close cooperation required with government makes political risk the largest consideration when evaluating the risk of a specific energy project. The recent elections in Nigeria provided President Buhari with a strong mandate to eliminate corruption and implement economic reform. The strong consumer-driven growth, large population and dire shortage of energy have always made Nigeria attractive to developers of energy projects. On the downside, the rampant corruption, dilapidated state of transmission network, lack of liquidity amongst distribution companies and poor financial position of government has in recent years made the market less attractive.  The strong contrast between the Nigeria and the other MINT countries, as well as South Africa in current installed capacity can be seen below.

The NIPP,  which aims to use otherwise flared gas from the oilfields in gas turbine power stations,  is still on-going with the Niger Delta Power Holding Company recently announcing  the second phase of their NIPP  participation. Further indicating a lowering of risk for future projects, the Nigerian Bulk Electricity Trading Company signed power purchase agreements with 10 thermal generation companies built under the NIPP.  Chronic gas supply shortages remain the biggest risk to this industry.

Although the South African REIPP programme remains one of the lowest risk investments in energy infrastructure on the continent, the recent financial woes of Eskom, the country’s power utility, as well as the economic doldrums the South Africa is experiencing, have increased the risk of these projects. The extremely competitive pricing of the current rounds of the project in contrast have also lowered the rewards in this market.

In conclusion, the risk profile of the African energy market has been significantly changed by the recent slump in commodity prices. The underlying theme of the continent however remains the need to bridge a significant infrastructure gap and a growing willingness by governments to foster an environment that enables this. The BMI Research risk reward index reflect this, as significant opportunities  still appear to exist, with Uganda, Ethiopia, Mozambique, Nigeria and South Africa being classified as low-risk and high-reward opportunities on the continent.