Measuring private equity performance in a standardised and easily understandable way has proven difficult, specifically for those that operate outside of the private equity space.

The greatest difficulty is that private equity cannot be measured like listed equity which has frequently available pricing and an accurate time series of returns.

Private equity is an asset class which best measures performance from inception to final exit. The lag and smoothing of asset valuations and the irregular and uneven nature of cash flows make performance measurement during the life of a fund far more challenging than with listed equity.

This results in private equity professionals often finding themselves in a situation where they don’t have the tools to appropriately benchmark their performance. I will be sharing with you a relatively new concept for benchmarking performance – the direct alpha method. It is a suggested improvement to the way excess return to benchmark is measured.

The alpha is measured on an annualised basis and is the latest addition to the RisCura-SAVCA Southern Africa Private Equity Performance Report. First, let’s start with the basics.

The most common performance measures for private equity are times money and IRR. Times money simply compares realised and unrealised value to total invested capital to provide a multiple of cost ratio. However, this measure does not account for the time elapsed since the investment was made.

For example, if two investments both returned a two times money (2x money), but investment A was invested for a two-year period and investment B for a five-year period, the times money would not distinguish an outperformer. But, investors would of course prefer to earn an equivalent times money over a shorter time period.

Both of these measures provide the return of the fund over a period from inception to a particular point in time. However, private equity is often benchmarked against listed equity, with an additional alpha required for the illiquidity.

There are a number of Public Market Equivalent (PME) – a means of measuring the performance of a private equity (PE) fund against a benchmark – approaches that are heuristic in nature and aim to estimate total alpha, rather than annual alpha, indirectly.

These methods are complicated and are subject to shortfalls in certain situations, sometimes resulting in biased, inflated or an inconclusive estimate of alpha. A method applied by RisCura for some time now is the PME method developed by Kaplan and Schoar in 2005 (KS-PME).

The KS-PME method is differentiated from traditional PME methods in that it computes a ratio of the performance of the PE fund. The calculation of the ratio assumes that all contributions are invested in the benchmark index on the date that capital was deployed into the PE fund, and similarly any distributions are also assumed to be reinvested in the benchmark at the appropriate date.

The limitation, of this performance measure is that the ratio does not provide any indication of the rate at which the excess return was generated. This is where the direct alpha methodology comes into play.

The rationale is that by adjusting the cash flows to a certain point in time, you have effectively removed the return earned by the listed market, leaving only the alpha achieved by the PE fund.

It may be more intuitive to some to adjust the cash flows to a present value (PV) rather than a future value (FV), the result of which would be the same.

The benefit of the direct alpha methodology over the KS-PME method is that, although the KS-PME indicates where additional wealth has been generated by a private equity portfolio relative to a relevant benchmark, the direct alpha can quantify the annualised excess return that was earned.

This can be seen in the graph below, where the results from the RisCura-SAVCA South African Private Equity Performance Report Q3 2016 show the direct alpha earned by the private equity industry over the three-year, five-year and ten-year periods. 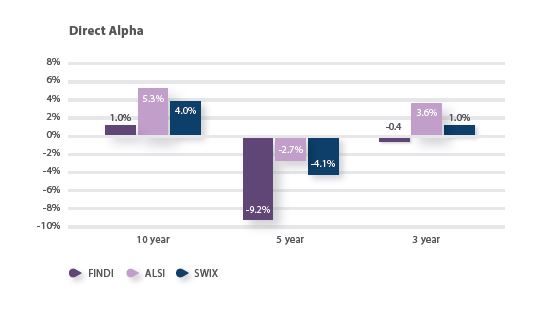 In summary, there are four measures that, when combined, will provide a comprehensive overview of the performance of a private equity instrument, each measure adding further insight into the level of the return.