Is your goal income or capital?

The goal of retirement savings is to secure an income stream that funds expenses for the duration of a retiree’s life. A key objective for trustees to consider could therefore be articulated as “limiting the mismatch between a retiree’s future income and expenses.” However, due to the practice of reporting member fund values (rather than the income that can be purchased through a product like a life annuity), members are often more concerned with accumulating a large pool of capital and not seeing this value decrease near retirement (or in fact ever!).

This focus on preserving capital naturally leads to high allocations to cash. Reviewing the asset allocations of most “conservative” investment strategies reveals that as much as 30% is often allocated to cash in the final years before retirement. The irony is that reducing the risk of capital loss through high cash allocations, may increase the probability that retirees could struggle to fully pay for their retirement expenses in the long-term.

For example, consider an extreme case of a retiree with savings of R1m that has a 100% allocation to cash, shown in the first two panels below. 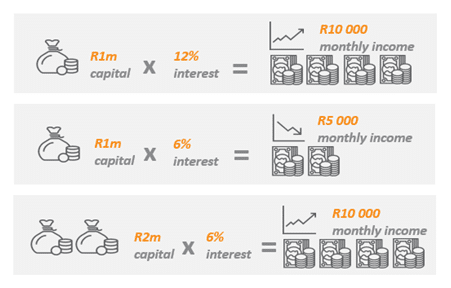 This approach is known as Liability Driven Investing or “LDI” and is the preferred approach followed by retirement funds. Sophisticated techniques are used to model both assets and liabilities to arrive at an appropriate asset allocation. At its core, LDI relies on allocating a portion of the portfolio to a to risk-reducing portfolio and a return seeking portfolio, as shown below. A risk budget will determine how much of the portfolio is allocated to these two portfolios. Allocations to the risk-reducing portfolio will increase as the risk budget decreases – usually as a member approaches retirement. 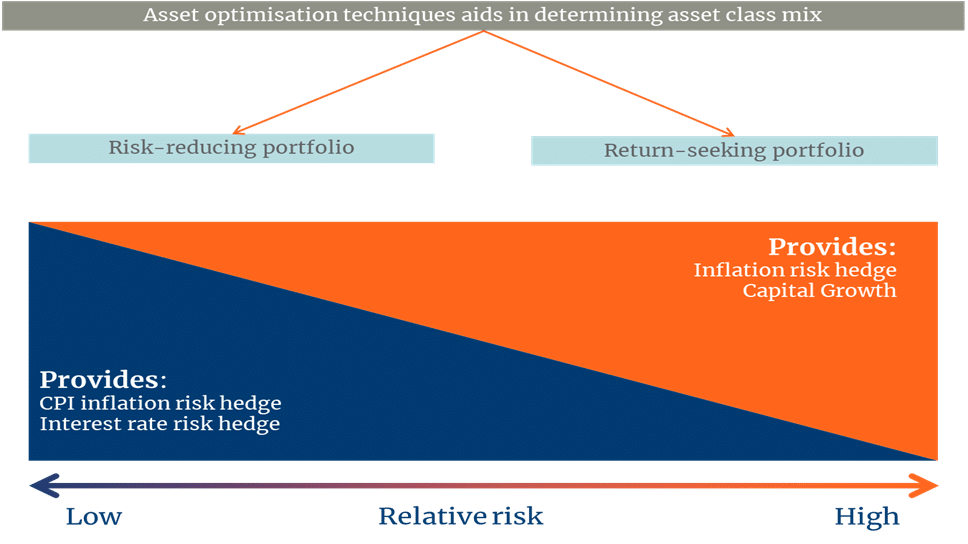 The key difference with non-LDI approaches is that the risk-reducing portfolio is typically cash and does a poor job of reducing the risk of mismatches between incomes and expenses, LDI will typically feature low (or zero) allocations to cash and greater allocations to nominal and inflation-linked bonds.

The income that products like life annuities can pay, can be used as a proxy for the cost of funding the future liability stream of retirees. The charts below show the monthly income from two annuity providers, together with the yield to maturity of long-dated nominal and inflation-linked bonds: 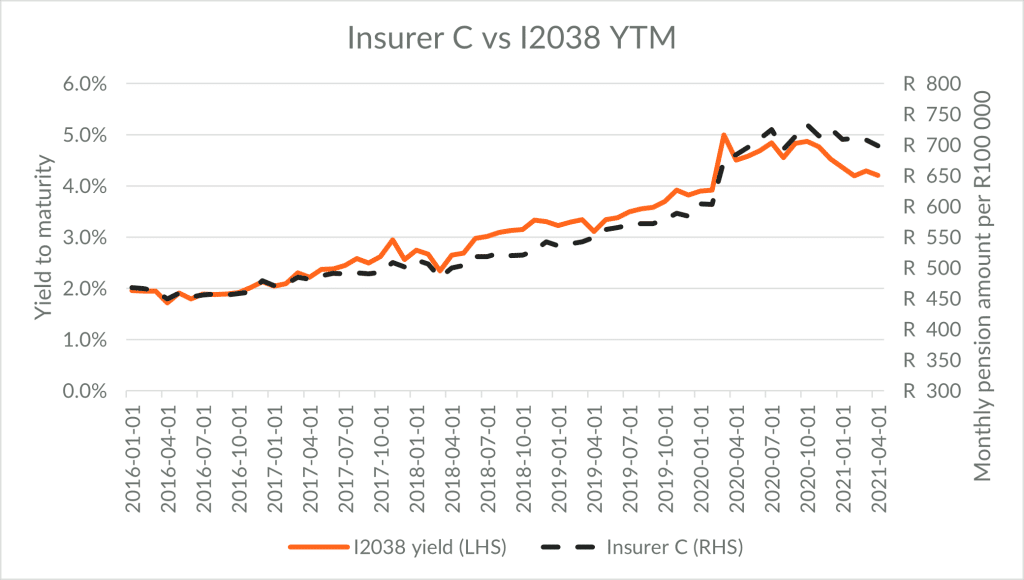 The chart shows the monthly inflation-linked income purchased by a 60-year-old male from Insurer C for R100 000, together with the yield to maturity of the I2038 – an inflation-linked bond issued by the South African National Treasury, maturing in 2038. 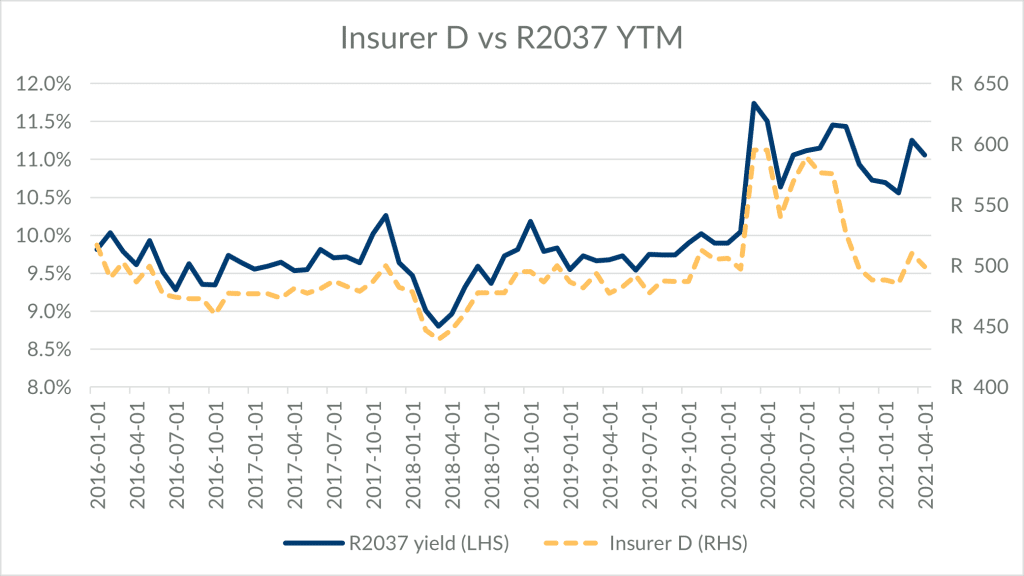 The chart shows the monthly inflation-linked income purchased by a 60-year-old male from Insurer D for R100 000, together with the yield to maturity of the R2037 – a nominal bond issued by the South African National Treasury, maturing in 2037.

The charts demonstrate that these insurers are primarily using inflation-linked bonds (Insurer C) and nominal bonds (Insurer D) to fund annuity payments. The correlations between the YTM and insurer payments are shown in the chart below, together with the correlations with cash returns (proxied by the STeFI Composite Index, which is a commonly used benchmark for cash as an asset class). 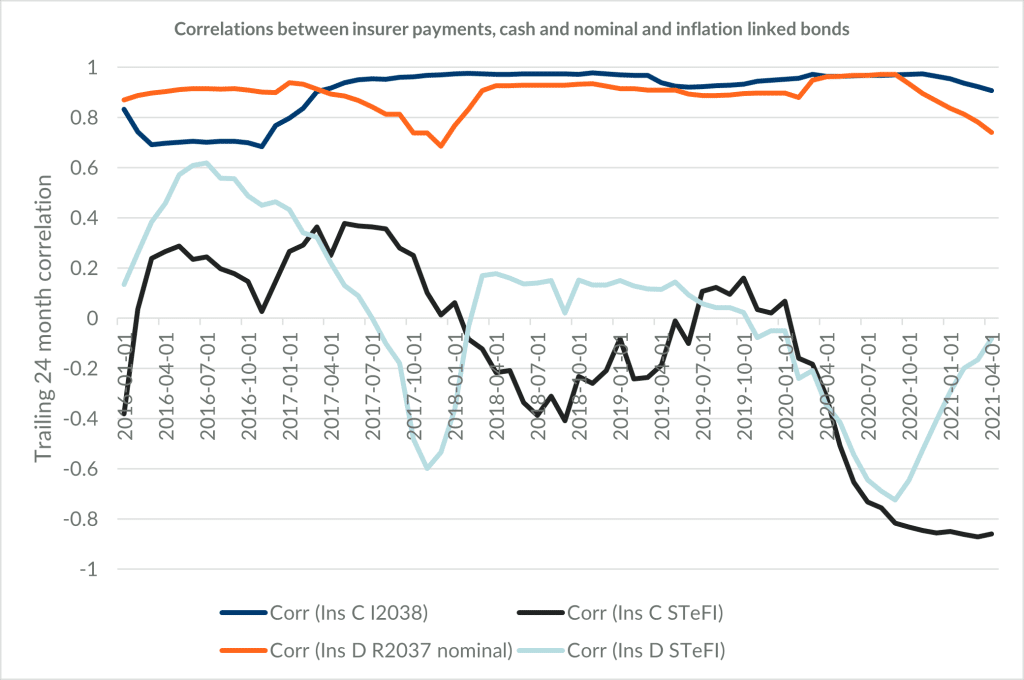 The chart shows the correlation between the annuity payments from two insurers with either the monthly return of the STeFI Composite Index (used as a proxy for cash) or the yield to maturity of the R2037 or I2038 bond, over the previous 24 month period.

The conclusion here is that where matching future expenses is crucial, as with annuity payments, bonds are preferred. In fact, cash shows extremely low and even negative correlations with annuity payments and increasing cash allocations therefore increase the probability of a mismatch between incomes and expenses – even though the stability of members’ fund values may be improved.

The previous section showed that cash does a poor job of ensuring that retirees will be able to fund their retirement expenses from retirement assets. This section shows that high cash allocations produce poor risk- adjusted returns for retirees.

The charts below show the risk and return characteristics of several low equity multi-manager portfolios, together with a portfolio that has been constructed following an LDI approach. Importantly, the risk and return numbers are shown relative to a reference asset, rather than the absolute number.

The first chart shows the risk and return numbers relative to the STeFI Composite index over the 24-month period to the end of March 2021. Risk and return here are both measured relative to cash and reflect an approach where capital preservation is considered the main aim. As the chart shows, the LDI portfolio appears to be a poor choice, as all the other portfolios deliver better risk-adjusted returns. 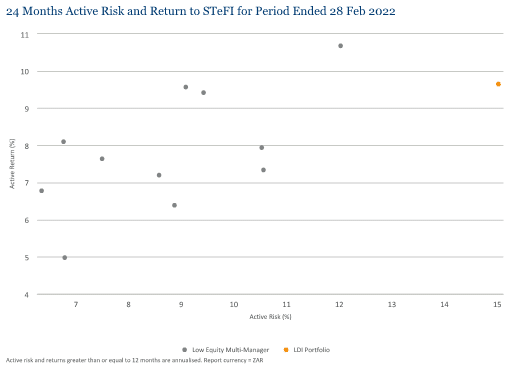 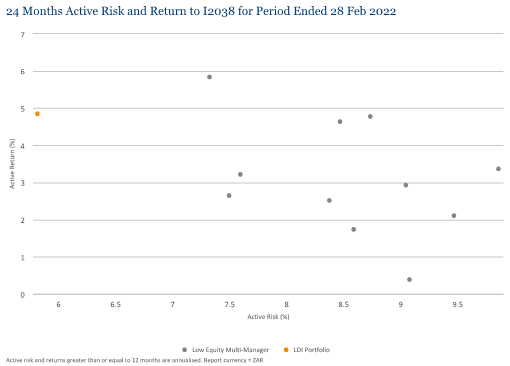 When more appropriate risk measures are used, it is clear that an LDI focused portfolio delivers superior risk- adjusted returns.

The ultimate goal of any retiree is to fund their retirement. An LDI approach recognises this by preferring nominal, especially inflation-linked bonds and even other risky assets to a certain extent, over cash. Cash may preserve asset values, but does not adequately preserve a retiree’s ability to match retirement expenses. Every member and fund’s objective is different. The investment strategy should be tailored accordingly. However, members and retirement fund trustees should be wary of high cash allocations when the ultimate objective is income throughout retirement, rather than just capital at retirement.