Even though the rapid vaccination rollout and a decrease in the global rate of infection spurred markets higher in February, US markets were sent roiling at month-end. Treasury yields spiked in the last days of trading and ended at 1.42% (up from 0.91%), leading to a rotation out of growth stocks, most notably technology stocks. The NASDAQ plummeted by 3.06% on the penultimate day of the month, somewhat surprising market participants.

“The rally in yields appears to have been spurred by inflationary pressure fears, and the consequent concern that the US Federal Reserve Bank (the Fed) would be forced to pull back on easing measures.”

The rationale is that the Fed and other central banks have little ammunition left in their arsenal to combat inflation, given that interest rates have repeatedly been cut (and are now at record lows). The market reaction, however, appears to have been somewhat overdone, and major indices, nonetheless, closed the month higher. The MSCI World closed  2.5% higher in US Dollar terms and the S&P500 gained 2.7%.

Central banks came out in support of continued monetary and fiscal stimulus, which kept the market bears at bay. The STOXX All Europe was 2.7% higher in Euro terms, with value sectors outperforming. The European Parliament gave the go-ahead for the Recovery and Resiliency Plan. Individual countries will soon be able to submit projects to the European Council. The Plan, if implemented effectively, could draw investors back into the Eurozone, reversing years of net equity outflows.

“The UK, which is well on its way to achieving vaccination targets for herd immunity, lagged its developed market peers during February, with the FTSE 100 closing only 158 basis points (bps) higher.”

This is perhaps all the more surprising as British Petroleum is a large player in the index, and the oil price continued increasing. Oil prices gained over 17% during February. Demand for other industrial metals, including Copper and Platinum Group Metals (PGM) also ticked up nicely. Copper gained 16.2%, Platinum was 10.6% higher and Iron Ore closed 11.4% higher. The uptick is a reflection of the nascent recovery in global manufacturing, as manufacturing surveys continue to show positive momentum. The extended fiscal support is boosting demand for goods, and facilitating domestic consumer spending. In the US, President Biden’s fiscal programme for $1.9 trillion was approved at month-end, providing further relief to cash-strapped consumers.

A modest increase in new infections caused mobility restrictions in China during the Lunar New Year and somewhat weighed on sentiment, and the stronger renminbi had an impact on exporters. Brazil, where the coronavirus appears to be spiralling rapidly out of control, could not capitalise on commodity strength and the Bovespa closed 4.37% lower.

South African equities notched a second month of solid gains, as the All Share Index closed 5.87% higher for February. Resource shares benefited from the gradual reopening of the global economy, and a strong global appetite for commodities. The Resources subindex climbed by 11.57% during the month, with particularly strong gains from PGM, and iron ore producers such as Sishen and Kumba. Inflation-Linked Bonds outshone their nominal counterparts, with the CILI gaining 1.86% versus a nearly flat All Bond Index (ALBI). This is as inflation expectations are becoming anchored to the middle range of the South African Reserve Bank’s (SARB) target range. South African consumers can expect to spend substantially more on transport, as the oil price ticked steadily higher and the rand weakened against the dollar. Petrol at the pump cost motorists 56c per litre more as of 11 February, while diesel prices increased by 47c per litre. And, it is expected that this trend is set to continue in March.

The country’s outlook worsened somewhat, with Stats SA delivering its latest Quarterly Labour Force Survey (QLF) in February. The report showed that an estimated 701 000 people lost their jobs in the fourth quarter of 2020, bringing the unemployment rate to a record high of 32.5%. The Budget Speech, delivered by Finance Minister Tito Mboweni on 24 February, brought little to cheer about. Some analysts regard it as a balanced budget and have welcomed government’s decision not to raise any additional tax revenue in this budget. Criticism has, however, been levelled at several key points. Of interest and concern is that State-Owned Enterprises, including Eskom and SAA, were granted additional bailouts. This is despite assurances that the government would not continue to pour money into the struggling parastatal rathole. It calls into question the political will behind much-needed structural reforms.

“The Budget Speech also starkly highlighted the extremely precarious fiscal position which the country currently faces. The budget deficit was revised to 14% of GDP due to the spending and economic pressures of the COVID-19 pandemic and gross debt has increased from 65.6% of GDP to a whopping 80.3% of GDP for the year 2020/21. Moreover, the proposed fiscal framework will stabilise debt at a substantial 88.9% of GDP, and this only by 2025/26, while debt service costs are expected to average one-fifth of gross tax revenue.”

Also included in the budget, was the news that R9 billion has been allocated to a free mass COVID-19 vaccination campaign over the medium-term. But disillusionment with the procurement and rollout process has seemingly taken hold of the South African public. After trials showed that the AstraZeneca vaccine, of which the country had procured 20 million doses, was less effective against the mutated strains of the virus, there appears to be a scramble to obtain alternatives. A mere 80 000 doses of the Johnson and Johnson vaccine were initially delivered, with a further 80 000 following at month-end. The vaccination programme, initially targeted at frontline healthcare workers, had by early March vaccinated just over 100 000 healthcare workers.

Meanwhile, month-end saw some good news for lockdown-fatigued citizens. On 28 February, President Cyril Ramaphosa announced that the country would return to lockdown level 1. This came as the number of new infections dwindled rapidly (averaging at approximately 1 500 new daily cases, down from mid-20 000 highs in January). All business, barring nightclubs, have been allowed to operate since 1 March 2021, alcohol sales have resumed their normal hours and the curfew was extended to midnight. Business owners have welcomed the normalisation of the economy, although a third wave of infections (and subsequent lockdown) remains on the cards. 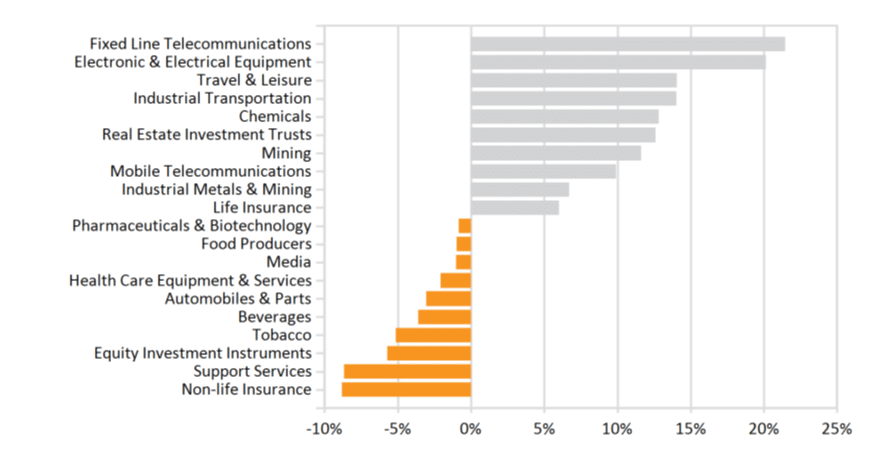