Markets were initially buoyed by the roll-out of vaccines in several countries, and by the promise of further fiscal and monetary stimulus. The International Monetary Fund (IMF) also appeared to give a nod to the burgeoning economic recovery, raising its forecast for global growth slightly. Emerging markets (EM) and riskier asset classes were beneficiaries of the glut of global liquidity, as investors continue to search for yield in a low interest rate environment.

“The MSCI EM ended the month 3% higher in US Dollar terms. Developed market equities, after a strong start to the month, gave up gains and the MSCI World closed 1% lower in US Dollar terms. The dip came as concerns about delays in the supply of vaccines to Europe increased, and many European countries announced that their lockdowns would be extended beyond February.”

Sentiment and growth in the Eurozone took a turn for the worse in January, with the flash Purchase Manager’s Index declining, as production continued to contract and restrictions continued to weigh on consumer sentiment. The STOXX All Europe closed the month 0.6% lower in Euro terms. The United Kingdom (UK) fared slightly worse than its European peers, but outperformed the United States (US). The FTSE100 gave up 0.7% for January, the first full month since Brexit took effect. The UK has made significant progress in its vaccination programme, but tiered restrictions remain in effect.

In the US, it proved to be rather a tumultuous few weeks in both politics and markets. Investors were buoyed by the expectation of further stimulus, as the Democrats made a clean sweep with surprise wins in the run-off elections in Georgia, ensuring them control over Congress. The party held true to its promise, announcing a further $1.9 trillion stimulus package, called the “American Rescue Plan”. The run-off election results spurred unrest amongst Donald Trump’s supporters, allegedly encouraged by the outgoing president’s public addresses and social media feeds. It culminated in the storming of Capitol Hill, resulting in widespread public condemnation of Trump and the suspension of his Twitter account. There was also a marked increase in equity market volatility due to concerted and targeted trading from a cohort of retail investors. This dampened risk appetite, and pushed the S&P500 off its highs. The index ended the month 1% lower.

“Chinese equities outperformed emerging and developed market peers, with the MSCI China gaining over 7% in January. The index was boosted by strong performance from e-commerce and technology stocks.”

Brazilian equities underperformed significantly, despite an uptick in commodities which traditionally underpin its stock market’s performance. Protests calling for the impeachment of President Jair Bolsanaro weighed on market sentiment, and the populace continues to vocally express its dissatisfaction with the government’s handling of the pandemic. Meanwhile, similar to the mutations occurring elsewhere (notably in South Africa and the UK), a new variant of the virus was found in Brazil.

Commodities are also expected to benefit from the reflation trade. With investors unsettled by potential inflationary pressure, especially in developed markets, traditional stores of value such as gold are likely to see an uptick in prices; the precious metal ended the month 2.6% lower. Oil prices continued to trend higher, and gained 6.2% for the month. The outlook for another traditional store of value, physical property, is somewhat less certain.

The FTSE EPRA/NAREIT Developed Rental Index has lost just under 10% over the past 12 months, partially a reflection of the severe pressure under which lessors find themselves, partly a reflection of rental concessions from landlords. Real Estate Investment Trusts (REITs) are also partially correlated to the macroeconomic trends and can move in tandem with the equity market.

“However, the pandemic has likely changed the way in which we work and live for the long-term. It has further facilitated the rapid rise of the digital economy, and specific property market subsectors are likely to benefit (logistics, distribution, shared office space) while others (traditional office space) are likely to suffer secular declines. “

South African equities outperformed global and EM peers, with the All Share Index gaining 5.2% for the month. Resources benefited from a weaker rand and industrials gained as the global economy continues to normalise.

“The outlook for the South African economy has improved slightly: it is estimated that the economy contracted by 7.1% in 2020 (versus initial estimates of -8%) and will rebound by 3.6% in 2021.”

The IMF, however, has continued to express serious concerns about the country’s level of indebtedness. Investors will keenly eye the February Budget Speech for indications of the path government chooses to take in addressing these concerns. Expectations are that numerous tax hikes are on the cards, particularly with regard to so-called sin-goods and services. Another Value Added Tax (VAT) hike, however, is highly unlikely, given the pressure under which South African consumers find themselves.

The South African Reserve Bank (SARB) kept the repo rate unchanged at 3.5% following its January Monetary Policy Committee Meeting. The SARB has indicated that the slow pace of economic growth means that inflation is likely to remain range-bound. It has, however, cited concerns about a weaker rand, higher oil prices and an increase in administered prices as reasons for staying its hand on additional rate cuts. In a somewhat related matter, the Competition Commission has heard evidence regarding unfair pricing practices regarding food items seen as essential. These items include garlic and ginger, two ingredients that are thought to have health benefits and assist in immunity against viruses. Findings are yet to be finalised.

“The government, after coming under heavy criticism for its vaccine procurement process, finally announced progress in this regard. The first doses of the AstraZeneca vaccine arrived in the country in the last week of January, and were set to be rolled out to frontline workers in the latter part of February.”

The rand weakened against major currencies, losing 2.6% against the dollar, 3.1% against the pound and 1.7% against the Euro. While this means importers are likely to struggle, given the uneven pace of the global recovery, export-oriented sectors (including resources) are likely to benefit. 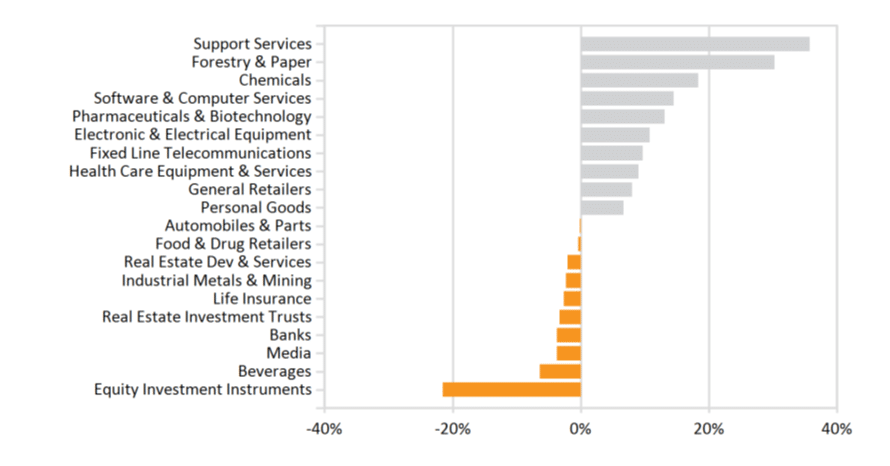