June proved to be a good month for risk assets, as global economies cautiously started reopening and against the backdrop of continued monetary support from central banks.

The US Federal Reserve Bank (the Fed) maintained interest rates at near-zero. It also indicated that it would be targeting monthly purchases of USD 80 billion of Treasuries and USD 40 billion of mortgage-backed securities. In addition to bond ETF purchases, it would also begin buying individual corporate bonds.

The European Central Bank (ECB) maintained interest rates at previous lows and increased bond purchases by €600 billion, bringing the total post-pandemic purchases to €1.35 trillion. It also announced that the new bond purchasing programme would last until June 2021. The Bank of England followed suit at its June Monetary Policy Committee meeting: It maintained interest rates at 0.1%, while increasing the target stock of purchased UK government bonds by a further £100 billion. The committee expects that the programme will draw to a close at the end of 2020, with the total stock of asset purchases reaching £745 billion.

“The Bank of Japan, whilst leaving its monetary policy unchanged, has boosted its coronavirus lending programme to over USD 1 trillion. The programme provides zero interest rate loans to banks, if they boost lending to companies. Its governor Haruhiko Kuroda also sent a strong signal that rate increases would be unlikely through 2021 to 2022.”

The People’s Bank of China (PBOC) somewhat confounded market-watchers, who were expecting further meaningful easing measures. While the bank announced that it would purchase up to 400 billion yuan (approximately USD 56 billion) in bank loans made to micro-and-small enterprises in 2020, no further stimulus was forthcoming.

Stock markets for the most part rallied on the glut of liquidity being pumped into the market. Emerging markets meaningfully outperformed their developed counterparts, with the MSCI EM up 7.35% against the 2.54% achieved by the MSCI World. Amongst developed markets, Europe saw COVID-19 measures ease up most significantly. European stocks consequently outperformed and the STOXX All Europe rose by 2.8%, versus 1.99% for the S&P500 and 1.66% for the FTSE 100. Emerging markets saw the biggest gains in China and Brazil (the MSCI China A Onshore rose by 9.99% and the BOVESPA by 8.76%).

Despite the rally in riskier asset classes, traditional portfolio hedges such as government bonds and gold have held up well. The strategic case for holding developed market government bonds has diminished as yields get ever-closer to perceived lower bounds. Conversely, high yield and investment grade corporate credit, and emerging markets offer relatively attractive yields. The sizeable spread can act as compensation for risks of default and potential downgrades. The measures being implemented by central banks worldwide – including significant purchases of corporate debt – remain supportive.

The spot-gold price rose by 2.9% for the month, bringing year-to-date gains in the precious metal up to 17.3%. Copper prices, which fell to multi-year lows in March due to suppressed demand amidst wide-spread lockdowns, are recovering well. Copper prices are sensitive to the global economic growth cycle. An increase in demand from China and a rapid drawdown of global copper inventories saw prices jump by 12.1% during the last month. As demand ticks up, oil prices too continued to claw back losses, gaining 9% during June. Optimism regarding the compliance of OPEC + countries with the agreed-upon production-cut deal spurred further gains.

“The picture for global growth is rather gloomy, although analysts differ on the expected recovery rate at of the global economy. The Fed has predicted a 6.5% contraction for US GDP in 2020; the latest official data from the UK shows that GDP shrank by a record 20.4% in April (month-on-month data).”

The Bank of France estimates a 15.3% contraction in the second quarter and foresees a 10.3% contraction in GDP for 2020; the European Central Bank (ECB) predicts a 8.7% contraction in 2020 for the region overall. The International Monetary Fund (IMF) recently slashed its outlook for global growth, forecasting a contraction of 4.9% for 2020, while the Organization for Economic Cooperation and Development (OECD) and the World Bank are more pessimistic, predicting 6% and 5.2%, respectively.

This calls into question the V-shaped recovery vaunted by market pundits, and seemingly priced in by the S&P500 inter alia. In support of this theory, there are signs of an economic revival as lockdown measures continue to ease. For example, US retail sales bounced back strongly and rose 17% for May, while UK sales rebounded by 12%. US unemployment data is steadily improving. Even though weekly jobless claims are still sitting at above 1 million (unheard of in the pre-pandemic era), the unemployment rate has fallen to 13.3% from 14.7% and the labour force participation rate saw a noticeable improvement.

China, where GDP declined by a record 6.8% for the first quarter, saw the release of some positive economic data points. Industrial output increased by 4.4% in May, the Caixin/Market Manufacturing Purchasing Managers’ Index (PMI) rose to 50.9 in June (a six-month high) and car sales in China surged by 11% year-on-year.

“The data suggests that momentum is picking up in China. Investor confidence in a sustainable recovery is shaky, however. Beijing saw a return to lockdown amidst a renewed outbreak of the virus, while infection and death rates in the US are still rising rapidly, and some emerging markets are believed to have not yet hit their peak.”

There are also other risks looming on the horizon. Potential fiscal fatigue may set in, particularly in less developed or less well-funded monetary policy regimes. Emerging economies are often already dealing with high levels of government debt, tight budgets and insufficient funding for social development programmes. The fiscus has little fat built in to continue to fund extraordinary COVID-related funding. The fear is that governments roll back their fiscal stimuli too soon before the virus is fully contained and before economies have been allowed to recover meaningfully. Political risks remain, particularly when it comes to the strained relationship between the US and China. US incomes have thus far been supported by stimulus cheques and generous unemployment benefits. But, these are due to expire at the end of July, and it is not yet clear whether the Trump administration will extend the programme. Brexit is fast approaching, as is the US election. Against the backdrop of a second wave of infections, markets are likely to remain choppy in the coming months.

The World Bank forecasts that South Africa’s growth rate will contract by an alarming 7.1% in 2020. Recent data shows that the country has already entered a recession: South Africa has recorded its third consecutive quarter of negative economic growth, with GDP falling by 2% for the first quarter of 2020. These figures do not yet reflect the impact of the lockdown. It is expected that second-quarter figures will make for stark reading.

“The Readjusted Budget Speech was delivered by Finance Minister Tito Mboweni on 23 June, and it too paints a grim picture of the state of the South African economy.”

National Treasury’s estimates of the economic contraction closely echo those of the World Bank (at -7.2% for the year, the largest decline in nearly 90 years). Unemployment has increased by 1%bringing South Africa’s unemployment rate to 30.1% in the first three months of the year. And this figure excludes the subsequent lockdown-related job losses.

The main changes to the budget relate to the COVID-19 fiscal package, which identifies R500 billion in economic relief. It includes R190 billion in main budget spending to protect lives and support livelihoods and a R200 billion loan guarantee scheme to support short-term economic activity.

Another stark reminder of the precarious fiscal position South Africa finds itself in, is that gross national debt will be close to R4 trillion (or 81% of GDP) by the end of this fiscal year. Debt-servicing costs are likely to spiral rapidly upward, from 4% to 5.4% of GDP, and is likely to amount to nearly 21% of government expenditure, its single largest component. On the revenue side, things do not look much brighter.

Thus far, tax revenue is estimated to be R304 billion less than forecast in the February Budget Speech. The reasons are threefold: Personal income taxes have come under significant pressure as a result of job losses and employers’ inability to pay full salaries during lockdown; Corporate tax collections were negatively impacted by closures during lockdown, uncertainty regarding when activity would resume, and weak consumer and business confidence; Value-added tax (VAT) and customs revenue have also been revised downward due to lower confidence, lockdown-related restrictions and a considerably weaker trade outlook.

“In his speech, Mboweni went on to outline two scenarios. The first, a passive scenario in which government fails to implement any significant reform, would see debt escalating to 120% of GDP in five years, and the country going into default. The second scenario would require two big adjustments.”

Structural reforms and the implementation of zero-based budgeting. But these choices necessitate very strong political will, and between now and the Medium-Term Budget in October, there would need to be clarity on what the reforms will be if South Africa is to weather this storm.

Business owners are clearly apprehensive about the economy’s ability to recover. The RMB/BER business confidence indicator fell to its lowest since the series began in 1975. An interesting indicator of consumer confidence – the time-to-buy subcomponent of the broader measure – has sunk to a 33-year low, indicating that beleaguered households are deferring big-ticket spending. It is hoped that the easing of lockdown measures will somewhat revive the economy. South Africa entered into lockdown Level three on the 1 June, and further easing of Level three restrictions (advanced Level three) even saw restaurants, casinos, theatres, cinemas, hairdressers, and beauty salons reopen toward the end of June.

“As the economy reopened, the IHS/Markit Purchasing Managers’ Index (PMI) started creeping slowly upward from its record low in May and hit 42.5 in June. Industrial output also rebounded, as factories reengaged dormant capacity.”

The JSE industrial sub-index put in a solid performance, increasing by 8.3% during the month. Among the big climbers on the JSE during June, Naspers registered a 13.4% jump in share price, while Prosus came a close second at 12.9%, partly on the resurgence in domestic Chinese shares. The financial sub-index lagged somewhat, reflecting continued strain on banks’ balance sheets, as lower interest rates squeeze profit margins and appetite for credit remains subdued.

The JSE Financials gained 4.1%. Resources, however, were the big winners, with overall commodity prices ticking higher. Diversified mining company Glencore rose by 11%, and goldminers such as Anglogold Ashanti gained as much as 19%. Overall, the return of risk-appetite spurred South African equities higher, as elsewhere in emerging markets, and the All Share Index closed 7.74% in the green.

“In contrast, increasing doubts about the country’s creditworthiness and the ability of corporates to weather the storm were confirmed by the gloomy emergency budget. Appetite for bonds subsided, and the ALBI lost 1.1% in June.”

Aside from the battered hospitality and leisure sector, commercial property companies and REITs have taken enormous strain. Fortress, as an example, has reported that it could collect only 51% of rental due for the first month of lockdown, and would be writing down the majority of rent owed. The bounce-back in listed property during June is encouraging, with the ALPI gaining 12%, but it comes against a backdrop of deteriorating property fundamentals. The sector has lost nearly 40% in value for the year-to-date.

As millions of South Africans return to work, the coming month is likely to see COVID-19 infection rates peak. And, even as the bruised economy slowly recovers, the Health Ministry has not ruled out that hotspots will return to more stringent lockdown-measures. 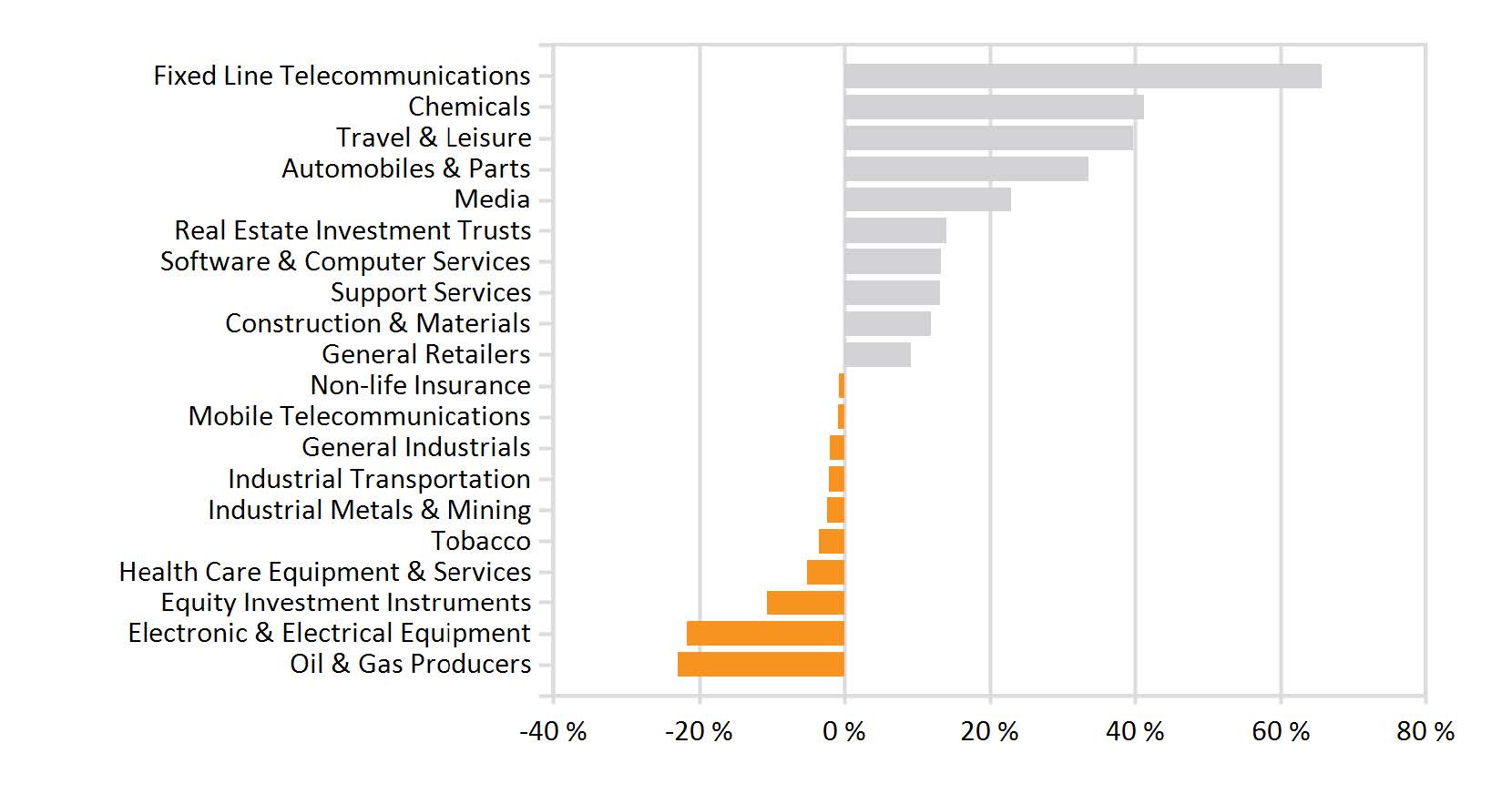