Global markets were unsettled during September against a backdrop of a second wave of coronavirus cases, mixed economic data and ahead of a contentious election in the United States. The MSCI World declined by 3.45%, while Emerging Markets fared better than developed peers, as the MSCI EM dipped 1.6%.

Previously red-hot large cap technology stocks corrected during the month as stimulus negotiations continued to weigh on the markets. The large-scale sell-off in tech stocks was somewhat unexpected, with news of a NASDAQ “whale” creating jitters amongst investors. “Whale” is a term associated with market manipulators. Such manipulators will come into a market, buy up large amount of stocks and drive up prices. Once the stock has achieved their target price, they will attempt to liquidate their position, which will generally cause the stock to correct.

In the case of the NASDAQ, which has had a strong run, investors consequently feared that a correction was imminent, selling off stocks rapidly. The prophesy effectively became self-fulfilling. Early in September, news emerged that Japanese conglomerate Softbank was taking massive bets on Wall Street tech stocks. The firm bought roughly $4 billion in options tied to underlying shares it had earlier purchased in firms like Amazon, Microsoft and Netflix. The options generated an effective exposure of about $50 billion. The NASDAQ has been selling off since the news broke. Incidentally, Softbank investors were left flabbergasted at the immense risk such massive positions imply, and the company’s share price initially fell by over 7%, but recovered to end only 0.5% lower over September.

“Nonetheless, tech valuations remain elevated and some investors wonder whether there is much upside left, and whether it is not time to take profits.”

Moreover, while there is not much that the political parties agree on, tech seems to be a target for both sides as well as being one of the most contentious issues in the Sino-US tensions. Higher taxation rates and stricter regulations are likely irrespective of the election outcome.

September saw the first round of presidential debates take place between challenger Joe Biden and incumbent President Donald Trump. Wall Street has become increasingly worried that uncertainty around the election will roil markets. And, the first in a series of three debates, acrimonious and chaotic as it was, did little to assuage these fears. Trump interrupted Biden on numerous occasions and repeated baseless claims about the proliferation of fraud tied to mail-in voting. Trump declared that he would not support the result “under certain circumstances”, leaving investors worried that he would not concede the election if he loses. This could lead to a long period of uncertainty after voters have cast their ballots. Itis the kind of rhetoric that leaves traders rushing to hedge bets in case market volatility spikes in the period surrounding the election. An interesting note around the election: In November 2008, a liberal Democratic President, regarded as anti-business, was elected. The S&P500 rose 26% in 2009. In November 2000, a pro-business conservative Republican was elected and in 2001 the S&P500 declined 16%, the central bank policy at the time is the key differentiating factor between these two periods. Currently, the US Federal Reserve Bank (the Fed), and other central banks, remain extremely accommodative.

While monetary policy remains supportive, as indicated at the previous meeting at Jackson Hole, Powell also emphasised that monetary policy alone could not support the economy in the absence of additional fiscal stimulus. And, whether additional fiscal stimulus will be forthcoming in the US is not yet clear. Democrats and Republicans were at loggerheads about another round of relief packages, with no formal negotiations since early August. In early September, Democrats blocked a pared-down Republican Party coronavirus relief bill in a bitterly disputed Senate vote. Many of the benefits approved by Congress in the $2 trillion Cares Act in March have run out, including small-business assistance, $600 weekly enhanced unemployment benefits and eviction protections. The failed bill would have authorised new support for small businesses and enhanced weekly unemployment benefits of $300. It did not include a second round of $1200 stimulus checks, although this is something that the White House supports. Following the death of Supreme Court Judge Ruth Bader Ginsberg, the prospect of a pitched battle over a Supreme Court candidate amid the election makes an agreement over additional fiscal stimulus even more unlikely. The process of electing a judge may absorb time and space on the US senate’s docket at the expense of other items, such as a stimulus bill.

The STOXX All Europe lost 1.46%. Madrid was placed in partial lockdown and the alert level has been raised to the maximum in Paris. The United Kingdom (UK) has also enforced stricter lockdown measures. The FTSE100 lost 1.54% and Sterling lost ground against the dollar as the UK Parliament introduced legislation that would undermine the existing agreement with the European Commission and increase the likelihood of a no-deal Brexit. The recovery in both the Eurozone and the UK is tentative at best, and the parties can ill-afford to divert attention to political wrangling.

In the UK, the index saw an even sharper decline, dipping by 3.4 points (although remaining in expansionary territory, albeit off a low base). Over in China, the recovery still seems to be on track. The Caixin Manufacturing PMI (which covers private and medium-sized companies) beat consensus estimates by posting the biggest improvement since 2011, driven by large increases in output and in new orders. The NBS Manufacturing PMI (which is the official government measure and largely covers state-owned enterprises) also beat estimates. Chinese markets, however, joined global peers in heading lower, with the MSCI China and MSCI China A Onshore closing 2.7 and 4.8% lower respectively. The Japanese Nikkei 225 managed to eke out a small gain of 0.8%.

“This, as equities took support from the election of Japanese Chief Cabinet Secretary Yoshihide Suga as leader for the ruling party in a landslide victory. His election paves the way for Japan’s first change in leadership in eight years, and he is seen to be particularly market-friendly.”

Oil prices dipped during the month, losing 6.5%. Demand was sluggish amidst a resurgence in coronavirus infections. Libya’s civil war has also abated, increasing production from that country. Iraq, one of the biggest players in the Organisation of Petroleum Exporting Countries (OPEC), has ratchetted up its oil exports. The supply-demand mismatch has consequently caused the drop in the price of black gold. Actual gold has also lost some of its lustre, with investors turning instead to other safe-haven assets such as government bonds and currencies such as the Japanese Yen. Gold prices dipped by 4% during September.

South Africa moved to lockdown level 1 on 21 September, but many observers are concerned that the move to open up the economy is too little too late. South Africa’s GDP for the second quarter of 2020, the period during which the country was in hard lockdown, fell by just over 16% quarter-on-quarter, giving an annualised growth rate of -51%. The latest contraction comes on the back of three successive quarters of contraction and an average growth rate of well below 1% over the past five years.

“Nearly all industries experienced a massive drop in output during the second quarter, with construction the hardest hit, shrinking by 76%.”

Manufacturing, a sector which employs a large part of the South African workforce, shrank by nearly 75% during this period. It is therefore not surprising that the country shed many jobs in Q2 – 2.2 million people lost their livelihoods, according to the latest Quarterly Labour Force Survey released by Statistics SA (Stats SA) on 29 September. Somewhat confusingly, the official unemployment rate showed a significant decrease of 6.8 percentage points to 23.3% in the second quarter. This is the lowest rate recorded since 2009. Important to note, however, is that the official rate does not include discouraged workers, those who are able to work but not actively looking for work. There was a significant increase in the number of people in this category, as many jobseekers lost hope of finding employment during the pandemic-related lockdown. The expanded unemployment rate, which does take account of these workers, increased by 2.3 percentage points to 42%.

“Business confidence in the country is already at an all-time low, further exacerbated by structural deficiencies and widespread corruption. In recent months, several companies have shelved their plans for further investment in South Africa, including SAB, a division of AB InBev.”

The company put a halt on a planned investment of about R5 billion due to the prolonged ban on alcohol sales. Heineken, best known for its beer-manufacturing, has called off a R1.5 billion investment, while Consol Glass (also somewhat reliant on the liquor industry) has suspended construction of a new glass manufacturing plant valued at R1.5 billion.

While global central banks have pumped liquidity in recent months, the South African Reserve Bank (the SARB) was more cautious. The SARB left the repo rate unchanged at its latest Monetary Policy Committee (MPC) meeting on the 17 September. There was a sharp drop in inflation expectations in the third quarter. This was partly helped by decreasing energy prices and slower food price inflation, as the agricultural sector has benefited from favourable weather conditions. Since the primary mandate of the SARB is inflation-targeting, and not economic growth, its reticence to adjust the interest rate is justified. The SARB has also opted to halt its purchases of government securities in the secondary market, confirming its clear intention not to use its balance sheet to fund the national budget deficit.

“The risks to the country’s debt sustainability remain elevated, with the pandemic set to leave South Africa with a budget deficit of 15.7% for the 2020 fiscal year. “

National Treasury is looking to raise an additional R40 billion via tax increases over the next four years with additional measures such as a proposed wealth tax to be announced in the 2021 budget. As it stands, however, revenue collection is in the red, with a cumulative year-on-year collapse of 20% in August.

Foreign bond buyers have been wary of South African government bonds, despite the relatively attractive yields on offer, but the pace of selling slowed somewhat during the third quarter. The All Bond Index ended near the flat line, losing five basis points (bps) for September. Against this somewhat gloomy backdrop, cash was the best performing asset class during September, returning 35 bps for the month. Equities returned -1.63%, and the All Property Index sank 4% lower.

“There have nonetheless been some positive data points, indicating that the economy is benefiting from the relaxation of lockdown measures. The Absa Manufacturing PMI rose to 58.3 in September, reaching above pre-pandemic levels.”

This is the quickest pace on record. Business confidence increased to -23 in the third quarter of 2020, after hitting a 35-year low of -33 in the preceding quarter. The biggest improvements were seen in the financial outlook of households and the purchases of durable goods. The IHS Markit South Africa Composite PMI also rose by a decent amount, reaching 49.4. It remains in contractionary territory, but it is a marked improvement from August’s 45.3. Notable in this measure, especially given the shocking unemployment figures that have just been released, is that the job-shedding rate eased to a six-month low as some firms increased hiring as new orders picked up. 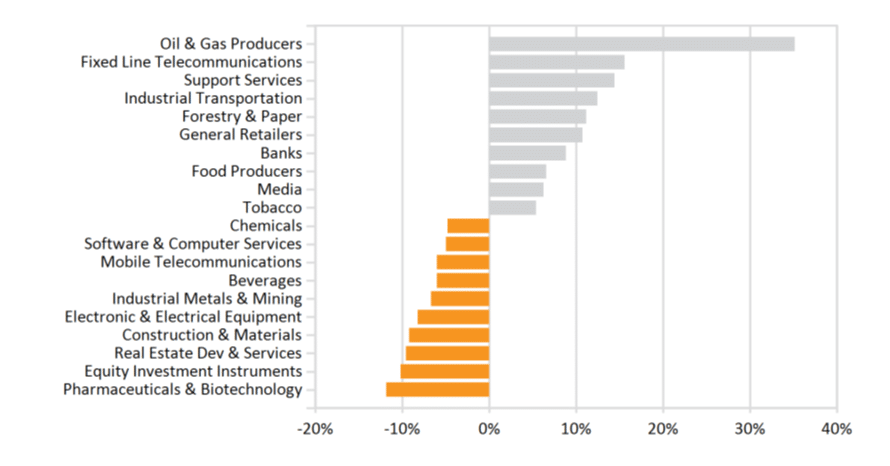