Redressing the Infrastructure Gap – Still a Bridge Too Far?

The World Bank estimates that the cost of bridging the infrastructure gap in Africa requires an annual expenditure of USD 93bn, or less than 5% of the total GDP of the continent.

Looking at China where about 8%-9% of GDP was spent annually on the construction of infrastructure to fuel its impressive growth in the last two decades, illustrates how Africa could develop its infrastructure to fuel its own growth-miracle. In China, almost half of the infrastructure expenditure was funded through central government sources. The low level of government revenue in Africa thus represents a serious barrier to infrastructure development and has increased the focus on partnerships between public and private entities to develop infrastructure. Examples of this are the recent Turkana Wind Project in Kenya, as well as other construction taking place in the LAPSSET Corridor.  South Africa, Kenya, Tanzania and Senegal have all recently established PPP units to enable the implementation of PPPs.

RisCura’s 2015 Bright Africa report examines the sources and extent of government funding per region in order to evaluate governments’ abilities to raise capital to spend on the construction of infrastructure. 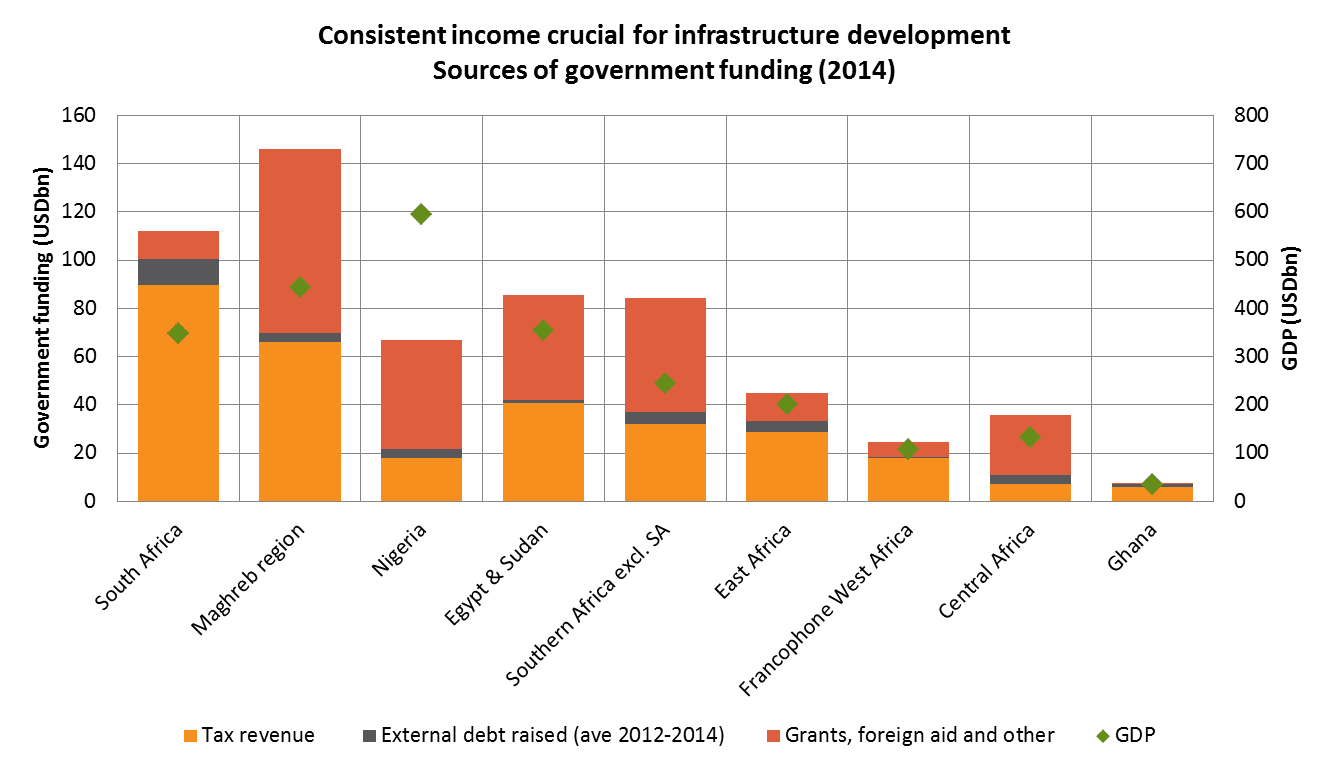 South Africa, the Maghreb region, East Africa and Francophone West Africa have relatively large tax bases averaging 20% of GDP. This is a stable source of income that is crucial for accurate and reliable planning, and is an enabler of long-term projects requiring multi-year commitments from governments.

In contrast, in Nigeria, the tax base is very small, at only 3% of GDP, with government reliant on oil royalties for revenue. In countries and regions with low tax bases, there is a low level of consistent income which could be used to raise bonds for infrastructure projects as well as support the high levels of repairs and maintenance needed once infrastructure has been constructed or upgraded.

In recent years African governments have returned to international debt markets as global investors have searched for yield. While this availability of debt has been a positive source of funding for governments, it remains relatively small compared to other funding sources.

Let’s take a look at the current infrastructure within Africa in terms of its road, rail and energy.

To analyse the investment in road infrastructure in various regions, the total kilometres of both paved and unpaved roads were aggregated. South Africa has about 750 000km of roads, with the next best region East Africa, only having about half of that.  The Maghreb as well as Egypt and Sudan has a very high proportion of paved roads versus unpaved roads as the populations are extremely concentrated in small areas with vast unutilised areas. The other major economic powerhouses on the continent: Nigeria, South Africa and Kenya have only paved 15%, 21% and 7% of their total respective road network.

When looking at Mexico, Indonesia and Turkey (MIT), which are often grouped with Nigeria as having similar risk and rewards, the North African countries and South Africa perform well, with, the rest of the continent a long way from catching up to the MIT nations in terms of total paved roads. However, the road density in MIT is much higher than all the African regions, which serves as another reminder of the much-needed investment in Africa’s road network.

South Africa has 20 000km of installed rail infrastructure and, given its relatively small size compared to other regional groupings, this translates to a high rail per land area. In absolute terms, the Maghreb region has 8 933km of installed rail, however, if the underproductive land area were excluded from its total land area, the region would rank much higher. The East Africa region is expected to add an additional 3 234km of rail infrastructure in the next three years, which would rank it third in absolute terms behind South Africa and Southern Africa excluding SA.

The energy needs of one million people in South Africa are served by 784MW of power. This is 2.5 times more than the region in second position (Maghreb region at 308MW). As expected the Maghreb, Egypt and Southern Africa (ex-SA) round off the top four.

South Africa compares well with the MIT nations as its installed energy capacity is greater than all the three nations. All other African nations excluding North Africa require a significant increase in energy investments to catch up with the MIT nations, in order to position themselves as attractive investment destinations.