The opportunity in China small cap

Chinese regulators have been busy with a crackdown against monopolistic behaviour by large domestic companies as part of the drive for “Common Prosperity”. A consequence of this is a more competitive environment which creates opportunities for smaller companies. And yet this space is largely unexplored in China. There are very few fund managers researching smaller companies despite the vast investment opportunity. A lack of information about smaller companies and a universe of thousands of stocks means investors need to operate like private equity fund managers where they must do all the work including building strong relationships with management teams. It is difficult, if not impossible, to exploit this opportunity without expertise on the ground.

Small Chinese businesses have an immense opportunity to grow into multi-billion dollar companies through a combination of the largest single consumer market in the world, first world digital and physical infrastructure, access to a skilled workforce and investment capital. A company in the UK can’t easily grow beyond a certain level without international expansion. Even within the EU single market, there are multiple languages, cultures and tastes. Given that China is a developing economy, there is often no mature incumbent to disrupt or displace. For example, e-commerce didn’t have to displace established physical retailers, or a new restaurant chain doesn’t have to compete against established global franchises to the same extent as in the UK or US. Physical retail is simply not as advanced in China (especially outside of the major cities) allowing old and new forms of retail to co-exist.

This environment makes the Chinese stock market unique where it is possible to invest in companies that can grow revenues and profits by five- or even tenfold over periods as short as 5 years.

If we examine the Chinese companies that have delivered consistent above-average growth, we find that the companies in this subset are spread across multiple sectors and not just vogue sectors like technology or healthcare. In fact, we expect to see more emerging winners from the Industrials sector as China bolsters its future manufacturing leaders, a program knows as “Little Giants”. 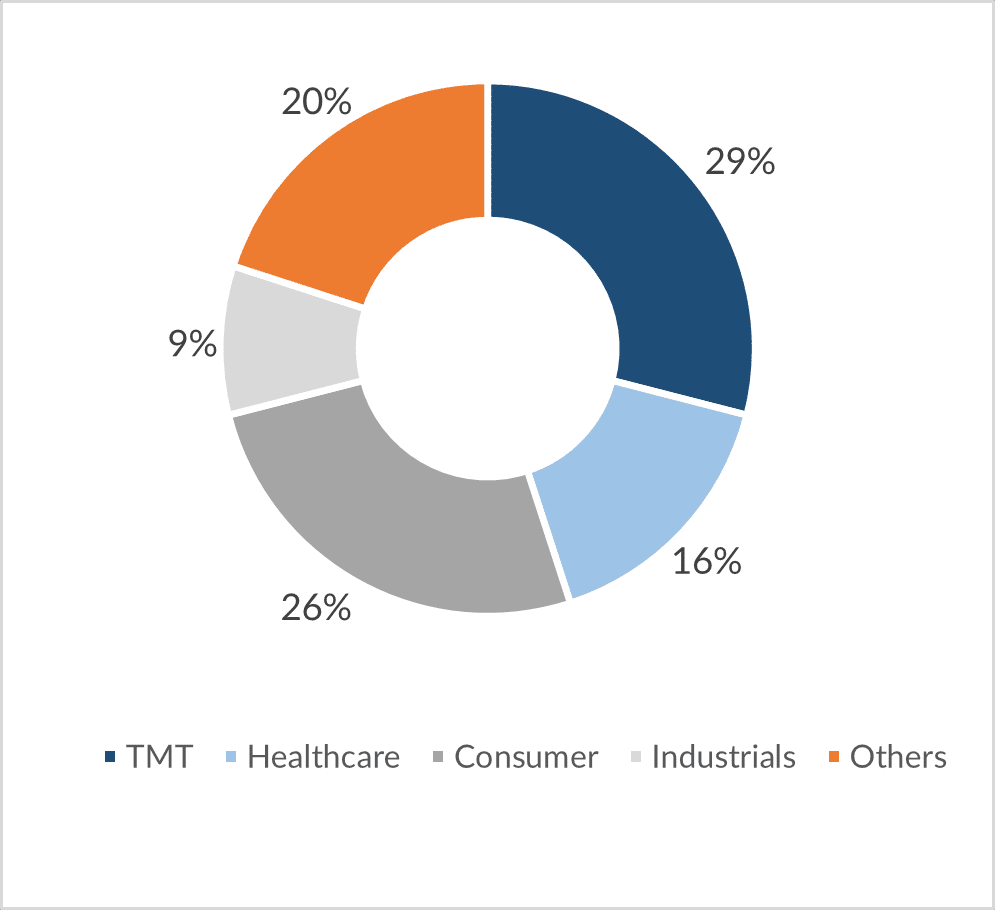 Source: T Rowe Price
A small business in China can grow much bigger and faster than in other parts of the world given the size of its population. Take fast-food: Yum China, the largest fast-food chain in China, operates over 10 000 domestic outlets. This compares to 1 000 McDonalds in Brazil, which is also the nation’s largest chain and has been operating for longer. Jiumaojiu, a Chinese restaurant chain and a small cap company when it listed in January 2020, is opening 150-200 new restaurants every year and is expected to continue at this rate for the next 5-10 years. In contrast, Burger King is considered “fast-growing” in Brazil at 50 new outlets a year. This simple example demonstrates the significant opportunity a young Chinese company has if it is well managed.

Successfully investing in small-cap in China is difficult because the universe is large with very little written or even known about it. There are 2 500 companies in the MSCI China Small Cap Index compared to 1 856 in the US. Most of these are mediocre; in fact, the small-cap index has underperformed the broader larger-cap indices over ten years. And, yet, there are significant winners within the universe – but finding these few exceptional companies is like finding a needle in a big haystack!

Over half of the securities listed on the mainland exchanges had no analyst coverage at all in late 2018. The same is evident when comparing analysts covering the average small-cap company across selected markets. 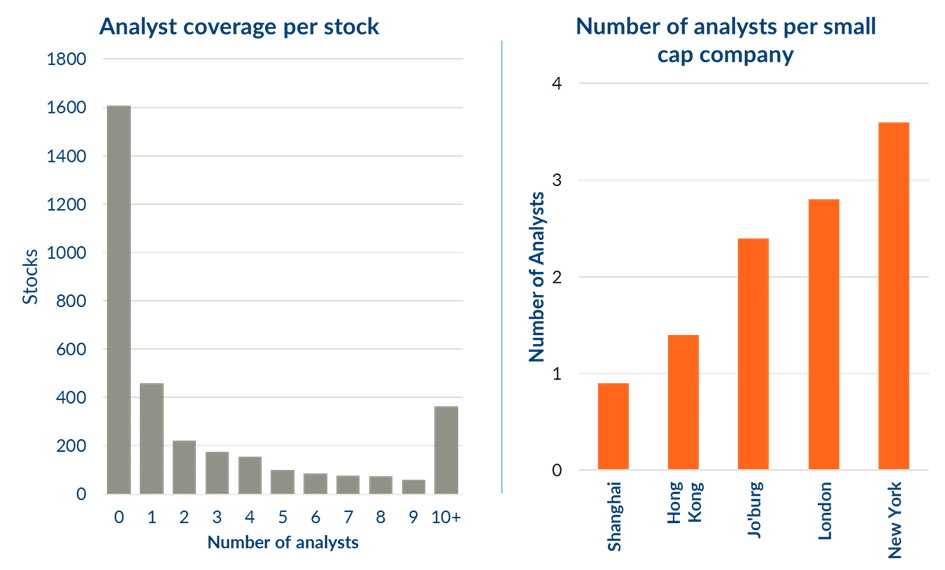 The lack of information, higher governance risks and the time it takes to fully research a company are similar to what is required in private equity investing. It is a highly specialised task that very few investors are interested in doing. That is why those who are willing to put in the effort can find rapidly growing companies at low valuations. The same would not be possible in developed markets or even English-speaking emerging markets such as India. Using their networks to source strong management teams, build relationships and invest at an early stage, those managers making the effort have seen companies whose market capitalisation increased from less than USD500m to double-digit billions of dollars. These same managers delivered returns in excess of 20% per annum over a period where smaller companies underperformed globally and especially in China.

In summary, we believe that China Small Cap is an overlooked area that holds a lot of potential. But the key is to find a manager who is willing to do the work to identify the best companies. Simply making a passive allocation is unlikely to succeed.